Congratulations to all of the 2007 NLLEA award recipients!

GAP grants have been given to 276 agencies, resulting in the disbursement of over $20 million in grant funds since the program’s inception. Many of these grants have spurred enduring multi-agency partnerships and efficient pooling of law enforcement resources as well as improved data reporting systems to track alcohol-related crime and other data associated with licensed alcohol establishments. GAP grants have been used to train community residents on how to maintain logs of nuisance conditions resulting from problem establishments and to educate alcohol licensees, servers, and sellers on how to improve their adherence to the law.

John W. Britt Community Service Award is named for a former Deputy Director for Operations for the North Carolina Alcohol Law Enforcement Division who died unexpectedly in 1995. John Britt was also a charter member and past president of the NLLEA. This 2007 award was given to Detective Blake Carlson of the Phoenix Police Department’s Liquor Enforcement Detail for his work forging partnerships and collaborations to address a dangerous crime trend affecting convenience stores in the City of Phoenix and a neighboring jurisdiction.

Before the fall of 2006, cigarette and liquor thefts at these stores had been treated like shoplifting; a misdemeanor crime. Det. Carlson examined information further and found that these thefts were, in fact, pattern robberies and burglaries providing steady revenue to repeat criminal offenders. Over the course of approximately seven months, Det. Carlson worked with the department’s Communications Bureau to update 911 operators and radio dispatchers about properly identifying these acts as burglaries and felonies. He also worked with convenience store corporate representatives to learn more about their surveillance technology and shared this information during patrol officers’ briefings. Det. Carlson also formed a task force to address the crime and provided guidance to the Tempe Police Department when it observed similar crime.

While Det. Carlson has always acknowledged the outstanding police work of his colleagues in apprehending 10 of the 14 suspects known to be committing these burglaries and robberies, it cannot be overlooked that he led the effort by identifying the problem, recognizing its significance, and spearheading a coordinated, effective response that resulted in the successful apprehension of dangerous and violent career criminals.

The Liquor Law Enforcement Agent of the Year Award is given for acts of heroism or bravery, creativity resulting in innovative programs, recognition by peers and/or the local community, or other actions that enhance the image of an agency or law enforcement in general. Alabama ABC Enforcement Division Agent Brian Harvin received the 2007 award as a result of his performance in the line of duty responding to a child abduction alert. On the morning of Saturday, May 12, 2007, a four-year-old boy was abducted in Ashford, Alabama while he was sleeping in a vehicle parked outside of a convenience store. Once the abduction was reported, law enforcement officers from Ashford, two neighboring jurisdictions, and the Enforcement Division began the search.

Approximately an hour after the initial report, Agent Harvin observed a vehicle matching the description of the stolen vehicle parked outside an apartment complex in the neighboring jurisdiction of Dothan. He approached the vehicle and observed the child alone and asleep in the passenger seat, still in his seat belt. Agent Harvin notified the Dothan Police Department and the child was taken to the hospital for evaluation before being reunited with his grateful family.

The 2007 Liquor Law Enforcement Agency of the Year was given to the New Hampshire State Liquor Commission’s Bureau of Enforcement and Licensing for its multifaceted approach to preventing underage access to alcohol, impaired driving, hazardous drinking, illegal gambling, and drug use. In the past year, investigations led to the apprehension of a college-based false ID manufacturer, the apprehension of the out-of-state ringleader of an identity theft criminal operation, and the shutting down of illegal gambling operations functioning out of licensed establishments. In this work, the agency has forged collaborations with State Attorney General’s Drug Task Force, the United States Secret Service field office in Manchester, State Police, numerous local police departments, and the fraud investigation units of two credit card companies.

In the interests of fulfilling the educational aspects of its mission, the Bureau has offered specialized trainings for servers and sellers of alcohol for a number of years, and this past year partnered with the state’s Highway Safety Agency, Department of Education, and Department of Corrections to launch an innovative program that educates residents on the dangers of drinking and driving. “The Ripple Effect” program involves BLE agents transporting state prison inmates convicted of DUI to schools and other venues to discuss how their actions on one day have had continuing ripple effects in the their lives and the lives of others. 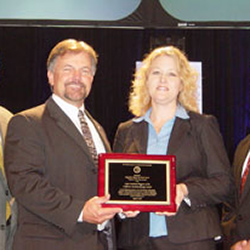 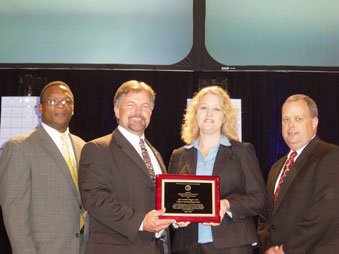 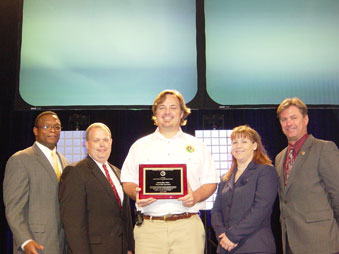 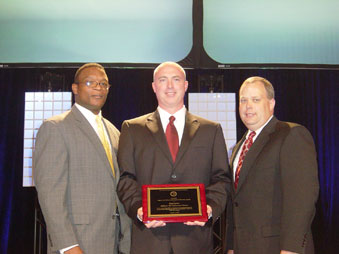 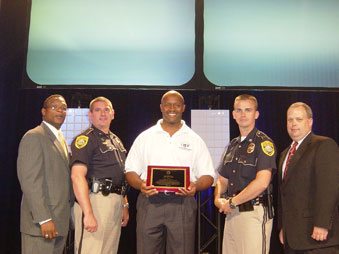 Liquor Law Enforcement Agency of the Year awarded to the New Hampshire State Liquor Commission’s Bureau of Enforcement and Licensing.