Congratulations to all of the 2015 NLLEA award recipients!

Each year the National Liquor Law Enforcement Association presents awards to outstanding leaders in the field of alcohol law enforcement. This year’s award winners were presented with plaques at the 29th Annual Conference “Improving Communities through Comprehensive Alcohol Law Enforcement Strategies” in Westminster, Colorado. The following awards were given:

The 2015 John W. Britt Community Award was given to three coalition groups that were instrumental in supporting the mission of the Virginia ABC in the Roanoke Valley area: the Roanoke Area Youth Substance Abuse Coalition (RAYSAC), the Prevention Council of Roanoke County, and the Roanoke Prevention Alliance. All three coalitions were public supporters of the VA ABC’s “Operation: Prevent Impaired Driving” and attended a press conference addressed to the community, aimed to reduce drinking and driving. During the Labor Day and winter holidays, the Roanoke Prevention Alliance worked with the VA ABC to distribute flyers to restaurant licensees and over 30,000 “have a plan” drink coasters to 80 Roanoke restaurants. Additionally, they distributed letters to all Roanoke licensed restaurants with a positive message about avoiding over-service of alcohol and advertising violations. From March 2013 to April 2015 the Roanoke Prevention Alliance monitored 121 Roanoke restaurant websites and social media pages and reported potential advertising violations to the VA ABC. Licensees found in violation were warned by the Virginia ABC, resulting in a drastic reduction of violations during the monitoring. The Prevention Council of Roanoke County focused on preventing underage alcohol sales by funding underage compliance inspections of licensed establishments in conjunction with the Roanoke County Police Department and the VA ABC. The Roanoke Area Youth Substance Abuse Coalition focused their efforts on underage drinking initiatives, implementing the VA ABC’s “Project Sticker Shock” in establishments across the Roanoke Valley. This community awareness program is designed to prevent adults from purchasing alcohol for underage individuals. RAYSAC partnered with stores to place stickers with informational and warning messages on alcohol products that appeal to youth. Virginia ABC Director of Enforcement Shawn Walker accepted the award on behalf of the Roanoke Area Youth Substance Abuse Coalition, the Prevention Council of Roanoke County, and the Roanoke Prevention Alliance.

The NLLEA’s Award for Innovative Liquor Law Enforcement Program is given in recognition of effective programs that have produced positive changes in community alcohol-related problems or programs that have resulted in new efficiencies or fiscal saving for liquor law enforcement.

The 2015 NLLEA Innovative Liquor Law Enforcement Program Award was given to the Indiana State Excise Police for their “Intensified Campus Enforcement Program”. The program was developed to address the high percentage of Indiana college students that reported using alcohol in college and university communities across the State of Indiana. The intensified campus enforcement program’s aim is to promote safety both on campus and in the affected local communities by coupling educational programs with high visibility law enforcement. The program’s goals are to reduce risky behaviors, such as underage drinking and binge drinking, and promote safer college communities for students and local residents. The program began in three college communities and was so successful it was expanded to include four additional universities, now having a presence throughout Indiana. Since its inception, the intensified campus enforcement program has held 315 enforcement details, utilizing 9,779 enforcement hours. A total of 3,103 citations were issued, with 229 issued for false identification and 39 individuals arrested for driving while intoxicated. Indiana Superintendent Matt Strittmatter accepted the award on behalf of the Indiana State Excise Police.

The Liquor Law Enforcement Agent of the Year Award is given for acts of heroism or bravery, creativity resulting in innovative programs, recognition by peers and/or the local community, or other actions that enhance the image of an agency or law enforcement in general. The NLLEA honored two agents from the same agency, Agent Israel Hernandez and Agent Elden Shepherd, as the 2015 Co-Agents of the Year, in recognition of their collaborative work on investigations within their unit. Agents Hernandez and Shepherd work in the California Alcoholic Beverage Control’s Department of Trade Enforcement Unit and both worked tireless hours on two extensive investigations that uncovered numerous ABC violations involving multiple suppliers and retailers. Both agents worked in an undercover capacity to gather evidence and, in the first case, worked over 400 hours and filed 40 accusations against licensees. In the second case the agents worked approximately 100 hours to gather evidence that involved suppliers across the country and 28 accusations were filed. Using their refined investigative skills, Agents Hernandez and Shepherd demonstrated the commitment and integrity worthy of the Liquor Law Enforcement Agent of the Year Award.

The NLLEA’s Award for Liquor Law Enforcement Agency of the Year is given in recognition of demonstrated agency effectiveness, implementation of innovative programs, community or media recognition or model training programs or practices. The 2015 award recipient, Texas Alcoholic Beverage Commission, demonstrated all of these strengths over the past year. The Texas Alcoholic Beverage Commission conducted a trend analysis and found consistent complaints with allegations of organized criminal activities, including narcotics trafficking, gang-related activity, cartel infiltration, financial crime-related fraud, prostitution, and human trafficking, taking place inside licensed establishments throughout the State of Texas. To address these concerns, the Texas ABC established a ten-member special investigative unit to determine the most effective enforcement activities to combat the serious violations occurring in licensed establishments, directly impacting public safety. The Special Investigative Unit agents were placed strategically along the Texas – Mexico border and in large metropolitan areas that were known for trafficking narcotics and as human smuggling routes. These strategic placements enabled the TABC to better respond to threats of public safety involving the sale of alcohol to minors and intoxicated persons while being able to dedicate resources to the ongoing problem of organized criminal activity inside licensed bars, nightclubs, and restaurants. This allowed them to disrupt and dismantle organized crime activity that has a nexus to the alcoholic beverage industry. The unit successfully established itself as a credible and reliable resource to the law enforcement investigative community, with an increase in requests for assistance and referrals of organized criminal activity from other law enforcement agencies. These efforts have resulted in approximately 40 permits being cancelled since the unit was established. Within the past year the Special Investigative Unit has seized 134 kilograms of cocaine, over 16,000 pounds of marijuana, and approximately 5,000 grams of methamphetamines. Additionally, over 50 people have been arrested for their involvement in organized criminal activity. Texas Alcoholic Beverage Commission Captain Ron Swenson accepted the 2015 award for the Liquor Law Enforcement Agency of the Year on behalf of his agency. 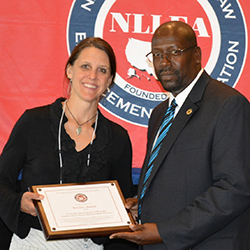 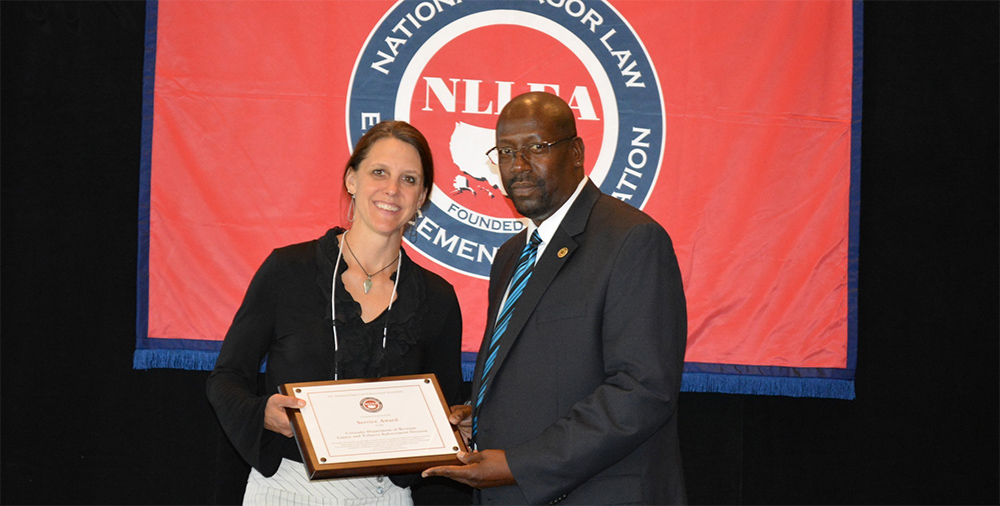 Colorado Department of Revenue Alcohol and Tobacco Enforcement Chief of Investigations Donia Amick accepts the 2015 Service Award for their agency co-hosting the conference. 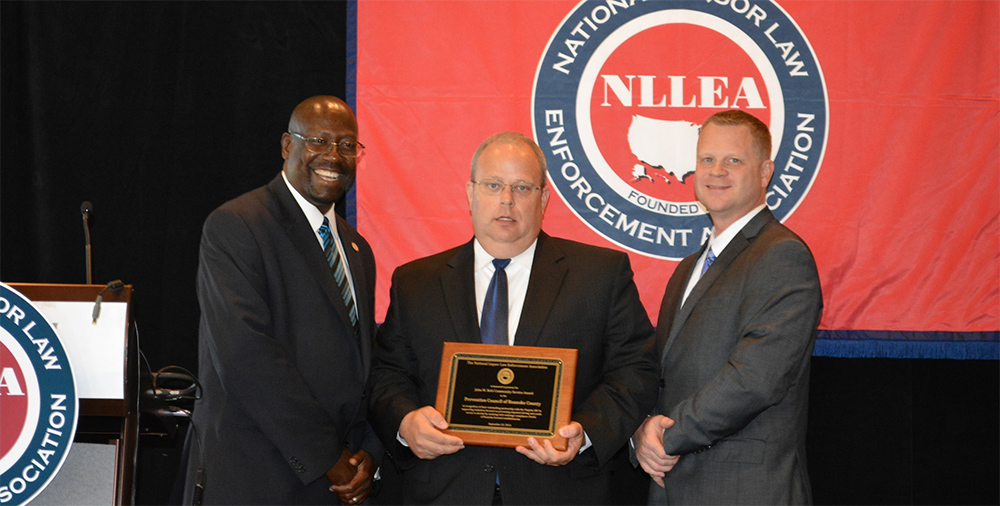 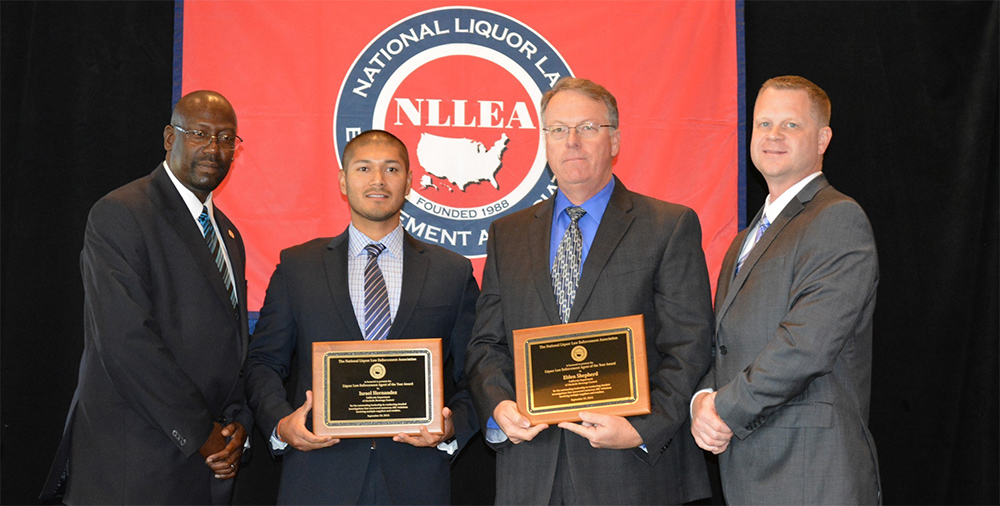 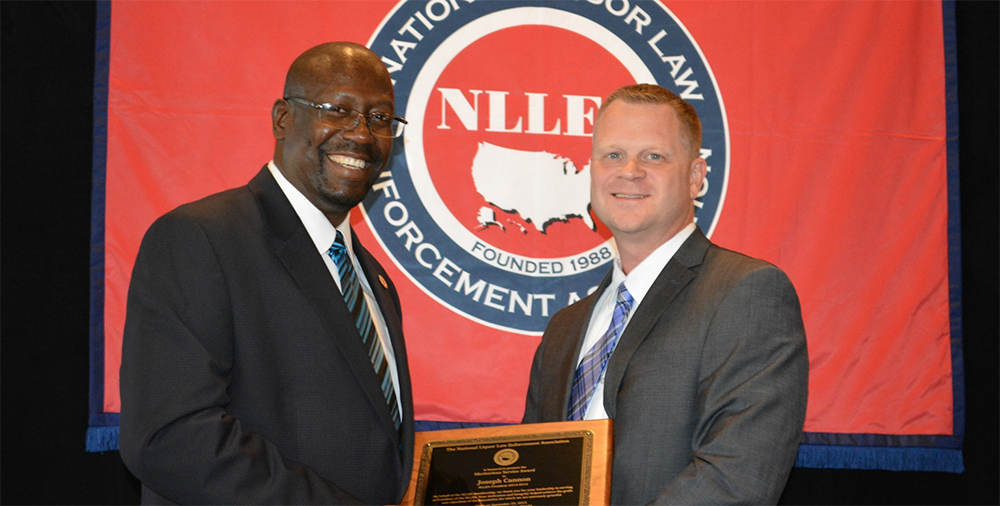 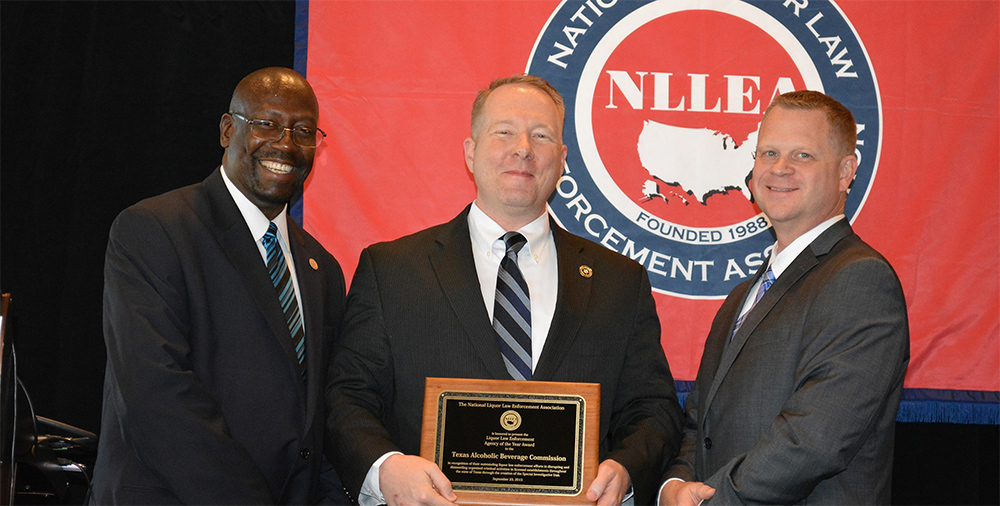 Texas Alcoholic Beverage Commission Captain Ron Swenson accepts the Agency of the Year award on behalf of their agency. 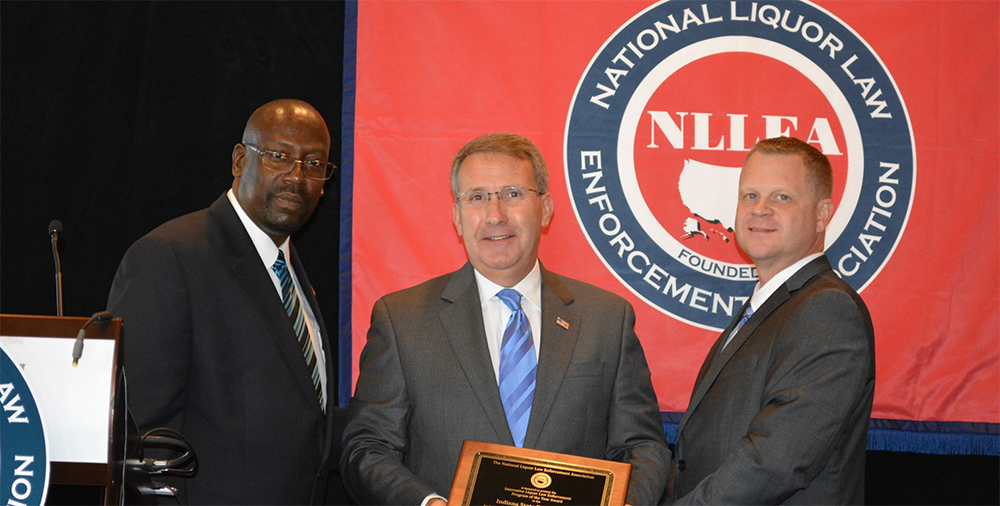 Indiana State Excise Police Superintendent Matt Strittmatter accepts the Innovative Agency of the Year Award on behalf of their agency.