Congratulations to all of the 2016 NLLEA award recipients!

Each year the National Liquor Law Enforcement Association recognizes the strongest operations, efforts, and leaders in the field of alcohol law enforcement. The 2016 award recipients were presented with commemorative plaques at the 30th Annual Conference “NLLEA: Celebrating 30 years of providing leadership and training for the field of alcohol law enforcement” in Indianapolis, Indiana on Friday, September 9, 2016.

The 2016 John W. Britt Community Award was given to the Keeping It Safe Under 21 Alcohol Use Prevention Coalition, a multi-agency, community coalition that works to reduce under 21 alcohol use and youth access to alcohol in Montgomery County, Maryland. The Keeping It Safe Coalition is completely volunteer run and seeks out ways to involve students in prevention efforts related to alcohol. When the Keeping It Safe Coalition heard from local liquor inspectors that alcohol retailers were in need of point of sale materials that deter minors from attempting to purchase alcohol, the coalition reached out to local high schools and asked them to submit poster designs supporting the message “We Check IDs . . . Even the Fake Ones”. Thirty designs were submitted. The coalition members selected a poster to be printed and it was distributed and displayed among all 25 Montgomery County owned liquor stores. Additionally, the Community Outreach Department of the Montgomery County Department of Liquor Control selected two of the designs to be printed as decals. 12,000 decals were printed and distributed at Montgomery County establishments. Unfortunately, the coalition was unable to send a representative to the conference, but will be celebrating their achievement at a ceremony in Montgomery County.

The 2016 NLLEA Innovative Alcohol Law Enforcement Program Award was given to the Hillsborough County Sheriff’s Office for their “S.A.V.E. and S.U.C.C.E.E.D.” programs. Both the S.A.V.E. and S.U.C.C.E.E.D. programs were created to reduce underage alcohol and tobacco related incidences, especially traffic accidents that result from underage drinking. The Sheriff’s Alcohol Vendor Enforcement program, S.A.V.E., was launched in 2006 to help the Sheriff’s Office partner with alcohol vendors and retailers to create a proactive collaboration that educated employees and managers on state alcohol laws, identifying false identifications, and responsible alcohol service. Any alcohol vendor can contact the Hillsborough Sheriff’s Office and request to have their alcohol service policies and employee trainings reviewed and/or to receive training tailored to their needs. Hillsborough County Sheriff’s Office collects Place of Last Drink data during DUI arrests and compiles a “top 10” list, which is used to identify establishments for S.A.V.E. to work with proactively to improve responsible alcohol service. The Sheriff’s Underage Compliance Checks, Education, and Enforcement Detail program, S.U.C.C.E.E.D., was established to reduce underage access to alcohol and tobacco through compliance checks, higher enforcement presence at high capacity events such as concerts and sporting events, and by conducting educational programs in schools.  There are 2850 licensed locations in Hillsborough County and the S.U.C.C.E.E.D. program has conducted 1884 compliance checks in those establishments, with 201 arrests made for sales to underage purchasers. NLLEA President Wesley Kuhl presented the award for Innovative Alcohol Law Enforcement Program of the Year to Deputy Sheriff Lawrence Morrell of the Hillsborough County Sheriff’s Office.

The Alcohol Law Enforcement Agent of the Year Award is given for acts of heroism or bravery, creativity resulting in innovative programs, recognition by peers and/or the local community, or other actions that enhance the image of an agency or law enforcement in general. The NLLEA received numerous strong nominations for this award, and selected two agents to honor as the 2016 Agents of the Year: The Ohio Investigative Unit’s Agent Daniel Mone and the California Alcoholic Beverage Control’s Agent Casey Tinloy.

Agent Daniel Mone of the Ohio Department of Public Safety, Ohio Investigative Unit receives outstanding praise from his agency for being a dedicated, reliable, and positive member of the unit’s team. He is always eager to take on new challenges and works tirelessly to make sure investigations are completed in a timely and professional manner. Agent Mone has proactively reached out to local law enforcement agencies to collaborate, which has resulted in multiple opportunities to work jointly on investigations and strengthened their relationship with the Ohio Investigative Unit. Agent Mone has saved multiple lives during his time with the Ohio Investigative Unit by his ability to think fast and take action, including stopping a wrong-way driver from continuing on the interstate highway and apprehending a person walking in public with a concealed weapon. In addition to be an outstanding alcohol law enforcement agent, Agent Mone is a decorated combat veteran, having received seven United States Marine Corp Commendation Medals and four ribbons. Agent Daniel Mone was presented with the Alcohol Law Enforcement Agent of the Year Award by President Wesley Kuhl.

Agent Casey Tinloy of the California Alcoholic Beverage Control has worked on many alcohol law enforcement investigations and this past year he led an undercover investigation into an unlicensed business that has been considered one of the largest cases in California since prohibition. During the investigation, Agent Tinloy served as the primary undercover operator, gathering intelligence and conducting surveillance of a wine shop that was identified by the Alcohol and Tobacco Tax and Trade Bureau as possibly operating unlicensed stills. Agent Tinloy arranged for search warrants to be served and two illegal stills, 200 gallons of illegal distilled spirits, and over 500 cases of illegally produced wine were seized. At the owner’s residence, more than 40 illegal firearms were seized, including fully-automatic assault rifles, grenade launchers, and gun silencers. Agent Tinloy was able to obtain a full, detailed confession from the suspect and several felony charges are pending against the suspect. This case has received national media attention and, due to the hard work of Agent Tinloy, has helped recognize the California ABC as a leader in ensuring public safety. Agent Tinloy has demonstrated the commitment and integrity worthy of the Alcohol Law Enforcement Agent of the Year Award. NLLEA was honored to present Agent Casey Tinloy his award at the annual conference. 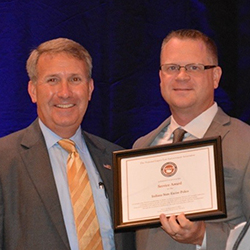 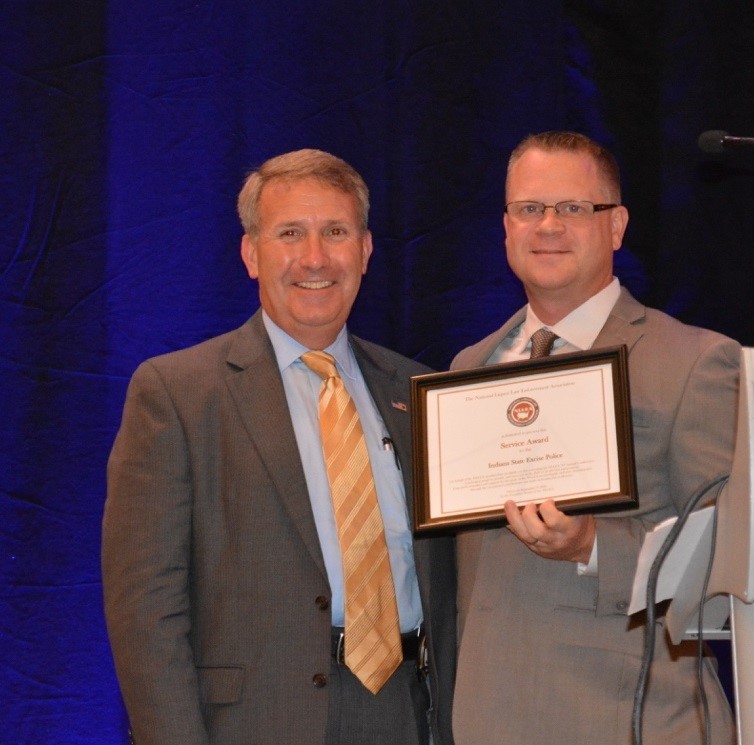 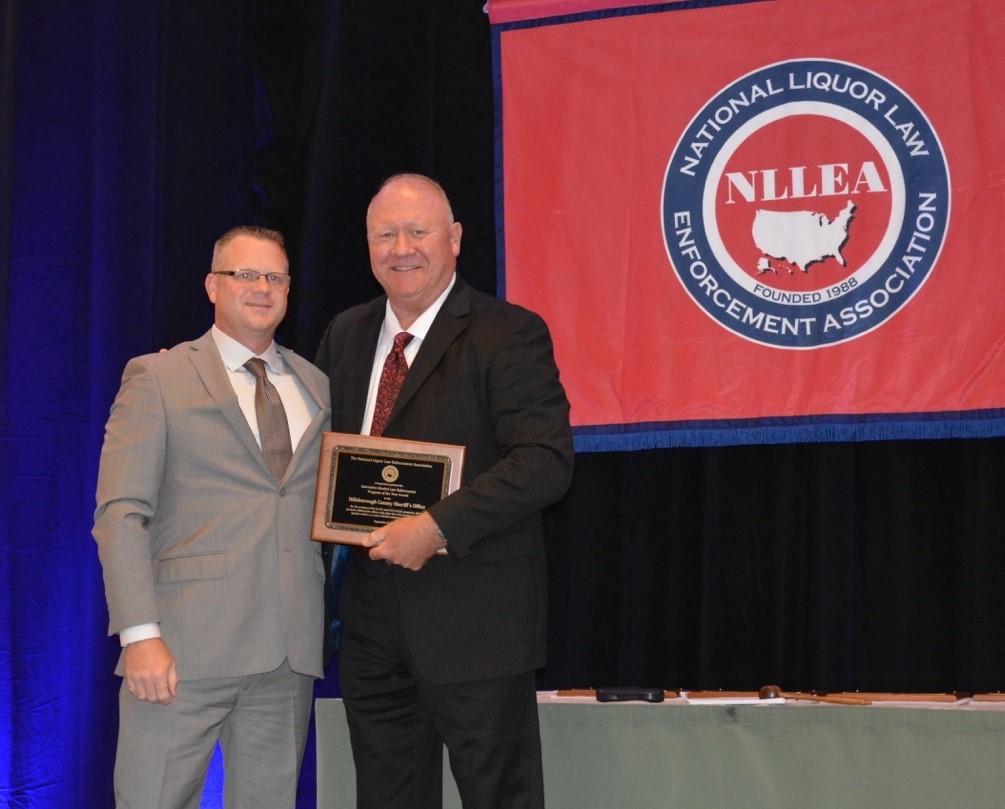 Deputy Sheriff Lawrence Morrell accepts the Innovative Agency of the Year Award on behalf of the Hillsborough County Sheriff’s Office. Delaware Division of Alcohol and Tobacco Enforcement Director John Yeomans accepts the Agency of the Year award on behalf of their agency. 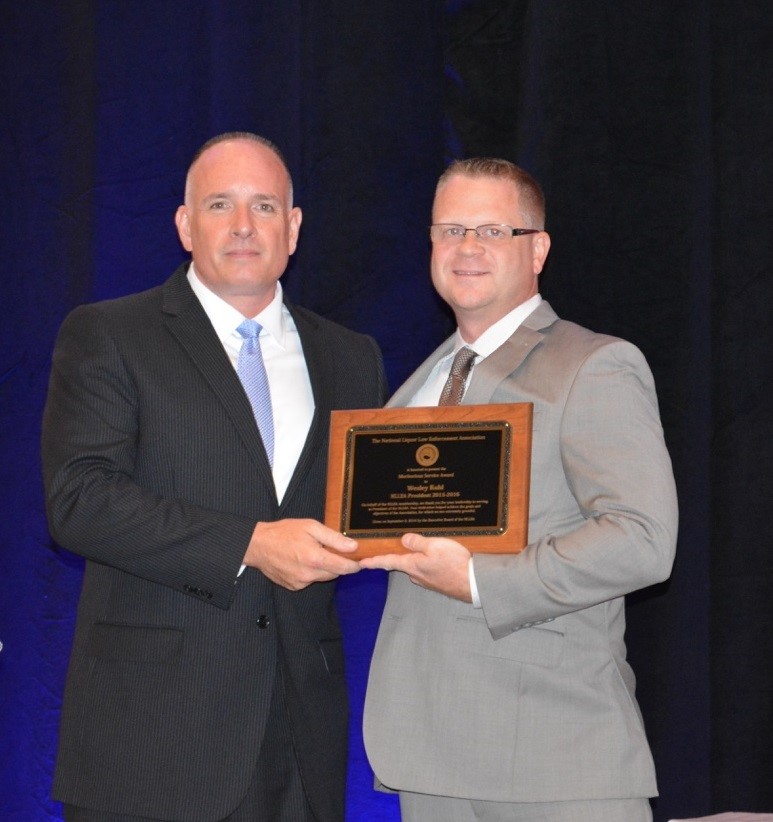