The NLLEA’s 18th Annual Conference was held August 25-28 against the backdrop of the sunny skies and blue waters of beautiful San Diego. Making the most of the setting, the Wednesday night President’s Reception was held in an outdoor pavilion next to the marina. After this relaxing start, the Thursday morning Opening Ceremonies brought the goals and purpose of the NLLEA into focus. The San Diego County Sheriff’s Department Color Guard opened the ceremonies with a solemn presentation of the flags. NLLEA President Aidan Moore welcomed everyone and introduced the other speakers—Maria Carmona, Director of the Underage Drinking Enforcement Training Center, William B. Kolender, Sheriff of San Diego County, Jerry Jolly, Director of the California Department of Alcoholic Beverage Control, and Bob Hohn, Highway Safety Specialist at the National Highway Traffic Safety Administration.

Once again, the Annual Conference was held in conjunction with the annual National Leadership Conference of the Underage Drinking Enforcement Training Center (established by the Office of Juvenile Justice and Delinquency Prevention). This year, the conference was also co-hosted by the California Department of Alcoholic Beverage Control. California ABC staff seemed to be everywhere, selling NLLEA merchandise at the exhibit table, staffing their own informative booth, offering an exciting General Session, and generally helping out anywhere that help was needed. Joining forces with the National Leadership Conference meant that members had 40 workshops to choose from, in addition to two plenary sessions and a host of NLLEA General Sessions and meetings. With nearly 1,200 people in attendance altogether, there was no shortage of networking opportunities.

Although all of the general sessions and workshops were well attended and provided valuable information, some of the highlights from the conference program include:

The NLLEA wishes to thank all the speakers who presented at the conference—your contributions made this a valuable and stimulating experience for everyone who attended. We encourage everyone to start thinking about workshops or other presentations for next year’s conference. It’s never too early to start planning!

In addition to offering a wide range of informative sessions, the conference also provided some opportunities for mixing business and pleasure. The OJJDP-sponsored Networking Reception on Thursday night took place on the USS Midway, a decommissioned aircraft carrier permanently docked in San Diego. Conference attendees were able to view the San Diego skyline from the nearly four acres of flight deck on this historic vessel, and docents were on hand to describe its 47 years of active duty around the world.

On Saturday, the annual Business Meeting was held. After reports from the Board and the Committees were made, and various issues discussed and voted on (for a copy of the unapproved minutes from this meeting, check the Meeting Minutes page of the Members Only section on the NLLEA website). The election for a new Sergeant at Arms was held with Lt. Eddie Edwards and Captain Stacy Drakeford throwing their names in the hat. Stacy Drakeford was elected to this position, and a vote was taken to advance all other members of the Board into new positions.

This process was completed at the closing banquet, when the new Board—Rick Phillips, President; Linda Ignowski, Vice-President; Shawn Walker, Secretary-Treasurer; and Stacy Drakeford, Sergeant at Arms—were sworn in. Past President Aidan Moore introduced a lighter note by passing on the President’s “cheese head” hat to new President, Rick Phillips. This tradition was initiated by former President Roger Johnson, who generously donated a Wisconsin “cheese head” hat to his successor. In turn, the Board presented Aidan with a plaque, thanking him for his year of service and dedication as President of the association.

The 2004 Annual Conference was a great success. Not only did more than 20 new members join the Association as a result of the conference, but the Association’s goals and mission were validated for members and other attendees alike. The dates and location for next year’s conference will be announced in January, 2005 and this event promises to continue to serve as an excellent opportunity to get to know each other better, share information, learn new skills, and advance our mission to promote and encourage the role of liquor law enforcement in protecting the public’s health and safety. 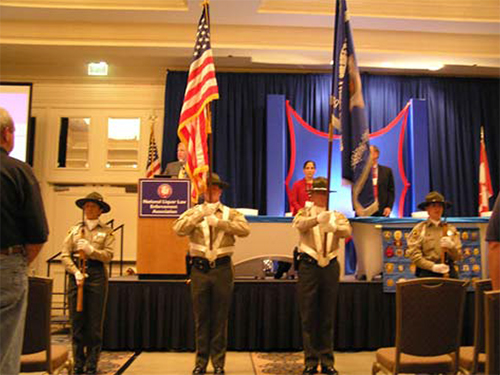