The National Liquor Law Enforcement Association’s 19th Annual Conference was a smashing success! Held in Tyson’s Corner, Virginia September 7 – 10th, the Conference was co-hosted with the Virginia Department of Alcoholic Beverage Control (Virginia ABC) and the Bureau of Justice Assistance within the U.S. Department of Justice through its support of the National Center for Alcohol Law Enforcement. Over 150 people attend the conference, with participants coming from as far away as Alaska, Hawaii, and Canada.

The Arizona Department of Liquor License and Control established its Fraudulent Identification Task Force out of concern for false ids that were being used not only by minors for purchasing alcohol, but also by criminals engaged in human trafficking and possible acts of terrorism. Through its work, three major cases resulted in arrests not only for the manufacture of false ids but also for narcotics sales. In addition, numerous items were seized, including computer equipment, over 1,000 fraudulent driver’s licenses on computer software, and thousands of dollars in cash. Arizona Governor Janet Napolitano has now established a statewide Fraudulent Identification Task Force, expanding the Department’s model and influence. Jesus Altamirano accepted the award on behalf of the Department.

The Hot Spot Liquor Task Force of the Phoenix Police Department was formed to respond to high volumes of calls for service and repeated acts of violence at various liquor establishments. It has evolved into a multi-departmental, multi-agency body comprised of various local law enforcement regulatory agencies, including the Arizona Department of Liquor Licenses and Control. While its mission is to reduce calls for service through education, the Task Force utilizes any and all remedial measures necessary to address problems stemming from lack of compliance with the law. It monitors calls for service and updates a “top ten” list of problematic liquor establishments monthly, and various measures, such as training, administrative sanctions, and criminal prosecution are applied against locations in the Task Force’s effort to improve compliance. The work of the Hot Spot Liquor Task Force has resulted in better quality of life for numerous neighborhoods in Phoenix. Lieutenant Bill Schemers and Detectives Blake Carlson, Echo Fulton, and Jeff Kornegay accepted the award on behalf of the Task Force.

In the past year, Investigators Armando Gonzalez and Frank Robles conducted a joint undercover operation with the Los Angeles Police Department in the Hollenbeck neighborhood of Los Angeles, and area plagued with a large gang presence and illegal drug activity in several bars. During their undercover operations in three of the worst bars, investigators purchase narcotics from gang members, patrons, and establishment employees. The investigations also revealed that the licenses had abdicated control of their premises to violent gang members who sold narcotics, furnished alcohol to minors, and controlled prostitution activity in these businesses. At great risk to their own safety, Investigators Gonzalez and Robles conducted undercover operations without their duty weapons due to searches that the drug dealers performed on bar patrons before allowing entrance. Because of these investigations, five suspects were arrested for narcotics trafficking, 15 people were arrested for illegal drink solicitation, and the ABC was able to prove that the licensee had direct knowledge of the illegal activity occurring in their establishments. Two of the licenses were revoked and a 45-day suspension was imposed on the third premise.

Following the Friday plenaries and workshops, conference participants were treated to a technology exhibition and reception sponsored by The Bars Program, First Data Corporation, and Intelli-check, Inc.

The Annual Business Meeting began promptly at 8:00 a.m. on Saturday. Agent Charles Sumner (Mississippi Office of Alcoholic Beverage Control) was elected to the Sergeant-At-Arms position. Members also voted to advance all other Board members to their new positions. (To read the unapproved minutes from the Annual Business Meeting, visit the Meeting Minutes page of the Members Only section on this website.)

Conference participants were invited to take advantage of several optional activities over the course of the conference. On Friday afternoon, the conference adjourned so that members could spend some time on Capitol Hill meeting with their Congressional representatives. During these meetings, members conveyed information about the nature and importance of liquor law enforcement and emphasized the Association’s value in promoting public safety. The NLLEA Board presented one Congressional representative, Virginia Congressman Frank R. Wolf, with an award for outstanding leadership on alcohol enforcement.

Closing Banquet and Swearing In of New Officers

The 2005 Annual Conference was a noteworthy event with much learned and much accomplished. This fall, the new NLLEA Board of Directors will determine the location of next year’s gathering as the Association celebrates its 20th Annual Conference. In the meantime, start thinking now about what you can share about your agency’s work at the next conference.

Board on Capitol Steps
Innovative Liquor Law Enforcement Program of the Year: Jesus Altamirano accepted the award on behalf of the Arizona Department of Liquor Licenses and Control. 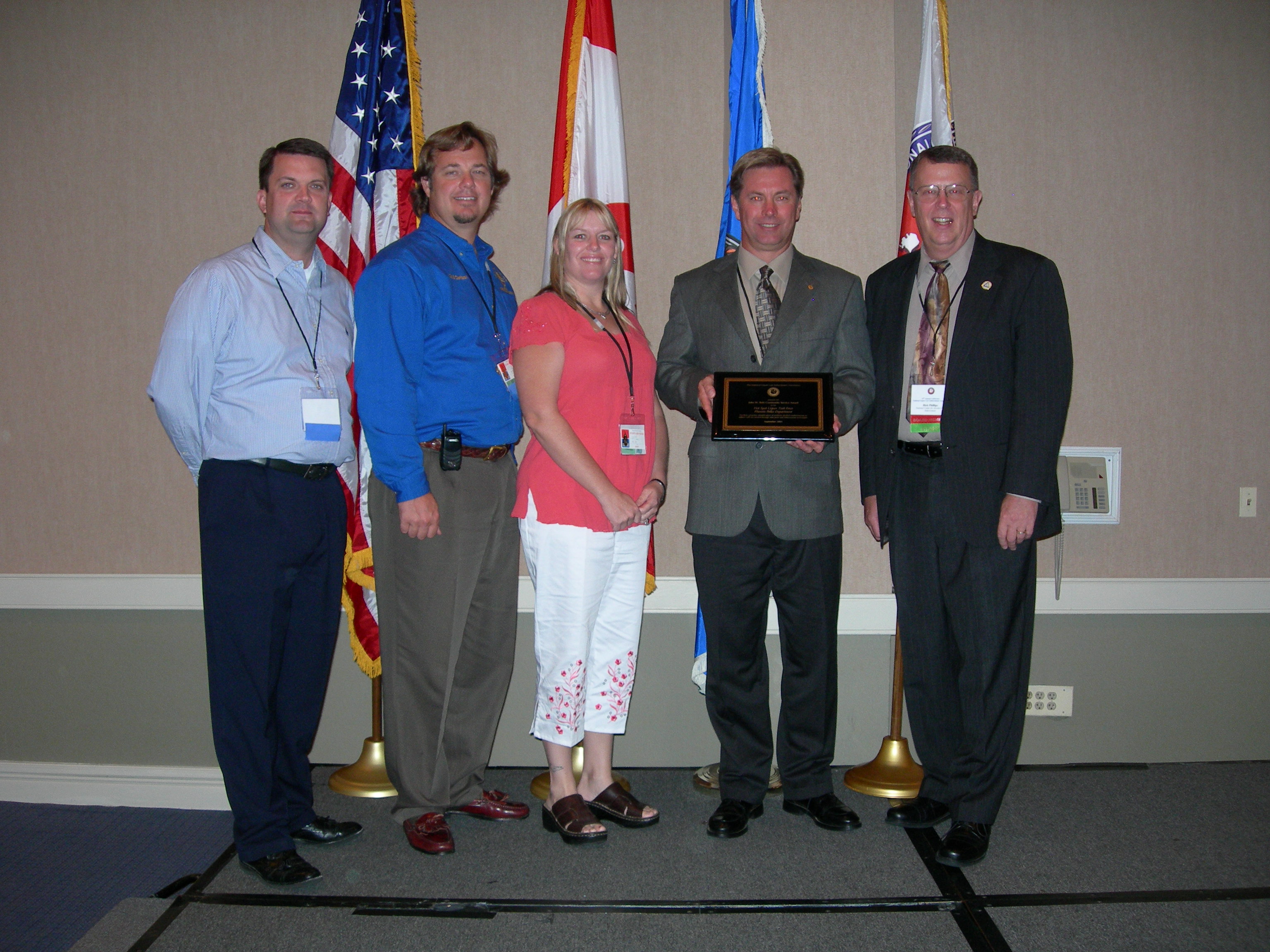 John W. Britt Community Service Award: Lieutenant Bill Schemers and Detectives Blake Carlson, Echo Fulton, and Jeff Kornegay accepted the award on behalf of the “Hot Spot” Liquor Task Force, Phoenix, Arizona.
Liquor Law Enforcement Agents of the Year: Armando Gonzalez and Frank Robles, California Department of Alcohol Beverage Control.
Technology exhibition and reception sponsored by The Bars Program, First Data Corporation, and Intelli-check, Inc.
The NLLEA Board presented one Congressional representative, Virginia Congressman Frank R. Wolf, with an award for outstanding leadership on alcohol enforcement.
Swearing in of the 2005-2006 NLLEA Board of Directors. From left: Rick Phillips (Past President), Charles Sumner (Sergeant-At-Arms), Stacy Drakeford (Secretary/Treasurer), Shawn Walker (Vice President), and Linda Ignowski (President).
Thanks were presented to Chuck Conkling for coordinating the Training Academy, to the West Virginia Alcoholic Beverage Control Administration for its support of the Academy, and to the Virginia Department of Alcoholic Beverage Control for hosting the conference.